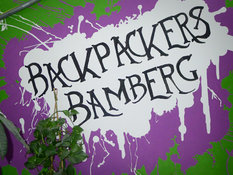 A family- and business-friendly backpacker hostel. Experience the beautiful UNESCO world heritage city of Bamberg in an atmosphere steeped in coziness. Our hostel is located directly between the train station and the city ...

It is kind of easy to get impressed by this bavarian city.
Bamberg's atmosphere is unique: charged with historic importance, packed with architectural highlights and filled with restaurants to get stuffed in. Bamberg's seven hills invite to stroll around streets with ancient buildings and marvel at times gone by.
Despite appearances, Bamberg has a strong interest in modern research and contemporary culture, too, and a lot to offer in those quarters.

Bamberg, once an Imperial city, lies in the north of Bavaria and is listed as UNESCO World Cultural Heritage. Quite rightly: Bamberg offers splendid sights, ancient buildings and a charming old town interconnected by Venice-like waterways.

Tourist sight number one is the ancient City Town Hall: Built in the middle of river 'Regnitz' it can only be reached via two stone bridges and features a Baroque facade on one side and a half-timbered one on the other side.

'Little Venice' comprises small half-timbered houses next to river 'Regnitz'. In earlier times, it was the home of Bamberg's fishermen.

Bamberg cathedral goes back to the 11th century and was financed by Heinrich II, whose tomb is one of the major sights. Magnificient statue 'Bamberg Rider' attracts numerous visitors, too. Its four towers dominate the city's skyline.
Two bishops residencies, the Old Court sporting a Renaissance facade and the New Residency featuring Baroque 'Emperor's Hall', are situated next to the cathedral.
As a former bishops residency Bamberg does not lack in beautiful churches and convents.

Just outside Bamberg you can visit 'Seehof' castle, a graceful Renaissance building and its elaborate park.

Bamberg is proud of its smoked beer ('Rauchbier'), a local speciality distilled by local breweries which can and ought to be tasted in one of the many restaurants and pubs.

Getting there and around

There are regional trains going from Würzburg and Nuremberg, takes around one hour and the costs are between 10 and 15 Euro. But there are as well ICEs going from Berlin and Munich.
If you are travelling with a car, take the A73.

Once you are in Bamberg, the best ways to explore the city are by walking or by bike. Leave your car, if you have one, somewhere on the outskirts, because it is no fun to drive by car in the city.

If you like to go out in Bamberg you have a great choice of different locations. Starting with wine bars and beer pubs and gardens (for example Holzklause, Weinstube Zeis or Kachelofen) followed by modern and sometimes kind of weird pubs and cafès (M-Lounge, Fischerei, Caipi-Keller).

Starting at the hostel your first stops will be the Fäßla and Spezial Breweries. From there continue to Keesmann, Maisel and Mahr's Bräu. Walking along the river and through the city centre you will reach the historical part of town where you can stop off for an unique Schlenkerla-Rauchbier (smoked beer). Passing the dome and walking through the quaint little lanes you can experience authentic German "Gemütlichkeit" in one of the many beer cellars. If you still haven't had enough by then, you can pay a visit to the Beer Museum at the Michelsberg and stop off at a Bamberg Fruit Orchard on the way back to the hostel.