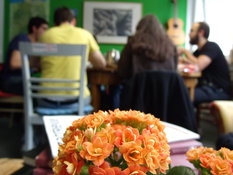 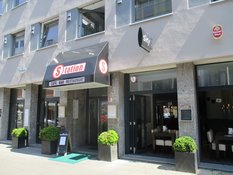 The original Backpackers in the Heart of the City.

Cologne is a modern city with a long history,centered around the imposing outline of the Cathedral ,with its two 157 meters high spires being the pride and symbol of the city,as well as been Germanys most visited Tourist attraction.

Founded by Romans, Cologne is one of Germany's oldest cities.Almost completely destroyed in WW2,Cologne grew quickly in the boom years of the 1950s and 60s...and though far from being beautiful it has a reputation of having something for everyone. Take a stroll through the Old Town nestled on the banks of the River Rhine,throw yourself into the hustle and bustle that is the pedestrian shopping streets of Höhestrasse and Schildergasse,or discover the numerous designer boutiques and craft shops in the Belgian Quarter and the up and coming Ehrenfeld District.

Enjoy a glass of the local beer (Kölsch) at a typical „Brauhaus“ in the Old Town,at one of the wonderful Beer Gardens or in a wild Bar in the Student area around the Zülpicherstrasse.The countless bars, restaurants and brewhouses also invite visitors to party. No other German city has as many pubs per capita as Cologne.

At nightime join the Party Crowd ,at a Chic club on the „Ring“ or in a disused Warhouse in Ehrenfeld,at a 12 hour Techno Party in one of the numerous Cellar Clubs,or at a Balkan Party in „Gebäude 9“. The central clubbing scene has established around Zülpicher Straße and Luxemburger Straße streets. Here, in the so-called "Kwartier Latäng" (like the Quatier Latin in Paris), you can live the motto "From Pub to Pub". Plenty of clubs cater to students’ tastes and budgets in this area which is also a stronghold of the alternative scene. The other main areas for nightlife are the Old Town, the "Südstadt" around Chlodwigplatz and Alteburger Straße, the fashionable Belgian Quarter, the original kölsche "Vringsveedel" (Severin Quarter) and the new multicultural trendy quarter of Ehrenfeld.

Throughout the year Cologne hosts some of Europes biggest trade fairs and events,such as the Photokina,Anuga, International Furniture fair and the Gamesom.Music events including the c/o pop and the Amphifestival attract thousands to Cologne year after year.With sports highlights like the BMX Worlds and Handballs Final 4 theres a huge range of things to see ,complementing Colognes main Football team 1 FC Köln (still pulling in over 40,000 fans for every home game ,even in the 2nd German division!) and its slightly less popular but rather more successful Ice Hockey team,the Kölner Hai (Sharks).

The 3 biggest events in the City couldnt be any more diverse,CSD,Karneval and the Christmas Markets.
Cologne stands for "joie de vivre", cultural diversity, tolerance and optimism. For many years now, Cologne has established itself as one of Europe's centres for gay and lesbian life. The most important event in the gay and lesbian calendar is the Christopher Street Day (CSD). Every year on the first weekend of July half a million participants and visitors celebrate and demonstrate in the city centre .

The "fifth season of the year" as Carnival is called, begins on November 11th at 11:11 a.m. But the real "crazy days" do not start before the so-called Weiberfastnacht (Shrove Thursday), the Thursday before Rosenmontag (Carnival Monday). The "crazy days" of Carnival are celebrated with parties on the streets, in public squares and in pubs. Closing times for pubs and bars are suspended for the duration of the festival.The highligh is the Street parade on Rosenmontag,a 7 hour long procession through the City,followed by a seemingly endless bout of drinking and dancing.

Every year, the city centre of Cologne is touched by the magic of the festivities in the run-up to Christmas. When the Christmas markets in Cologne open their gates on the last Monday before Advent, millions of visitors from around the world delight at the goods on sale at the quaintly designed huts (or "Buden").With 7 different Markets,a huge Ice rink at Heumarkt and enough "Glühwein" to sink a Battleship,everyone goes home happy.

So when you are in Germany,make sure you give us a visit here in its 4th biggest City.Choose from 1 of the 3 Independant Hostels on the Backpacker Network,set aside a couple of days,and soak in all that Cologne has to offer.

(Many thanks to Frank Brehm (frankolor.de) for a few of the Photos,the rest are from Neil Pearce)