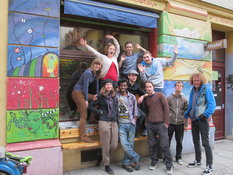 Lollis Homestay is located right in the Neustadt - the centre of the cultural nightlife of Dresden. It´s designed by artists from the neighbourhood and every room has its own theme. You will find wide-ranging services ... 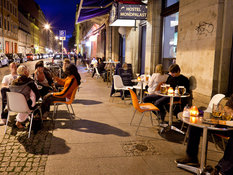 Hostel Mondpalast offers you the real backpacker-atmosphere. Hang around with travel fellows, cook and talk together in our guest kitchen and stay right in a phantastic multi-cultural neighbourhood.

Welcome to the “Tal der Ahnungslosen!” (The Valley of the Clueless). Because of the hills along the river Elbe, we weren’t able to receive West German TV during the GDR. Eastern TV was full of propaganda and nobody was hearing the truth. Sometimes if we got stuck of the valley for too long, we’d escape up into the hills to avoid the lies and to clear our minds. Needless to say, it is awesome to see the city from above!

Learn the basics.
1) August the Strong (1670-1733) is the guy who made the Altstadt look the way it does. Without him, Dresden would probably still be a village.
2) On the night of February 13th, 1945 Allied Forces bombed 60% of Dresden to ruins. Between the 13th to the 15th of February, at least 25,000 people died, most of them civilians.
3) After the War, Dresden became part of East Germany (GDR or German Democratic Republic). The communist government kept some of the ruins as memorials of the terrible war.
4) In 1989 when the wall fell, Dresden started a new life. People painted flashy colors all over the gray history and a lot of the ruins were rebuilt to look like they did before their destruction. Even today the Altstadt is partially a construction site.

Take a break. Dresden is cozy and easy-going, much more so than Prague or Berlin. This is why the rest of Germany calls us the "coffee-Saxons," which is supposed to describe typical Saxon calmness. Not only do we love coffee, but one of us Dresdner’s even invented the coffee filter and gave it its name – Melitta.

Hurray for Dresden! We have the oldest suspension bridge in Europe, the biggest fleet of steamboats, the biggest porcelain artwork on a wall, the oldest mountain cableway and (hurray!) the second longest tram in the world (45 meters)! Furthermore, we invented the teabag, toothpaste, the wonder bra, shoe polish in a tube, the beer coaster, milk chocolate (even before the Swiss) and the reflex camera.

Whenever you hear somebody say "Nu", don't think they’re disagreeing. Quite the contrary. "Nu" is the Dresden version of "Yes" or "Ja" in German. And yes, "Nu" sounds very similar to "No" or "Nein" in German. If you think this is a bit confusing, wait until you get confronted with "Nu Nu" for "Yes, sure" or "Na Nu" for "I know". Got it? Nu Nu...