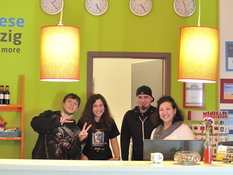 The new Five Elements Hostel in Leipzig even outmatches the high standards we set with the first Five Elements in Frankfurt: Prime location a short walk from the station, stylish rooms in a superb historical building. Hotel ... 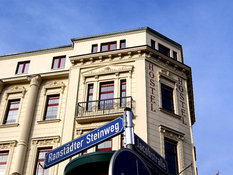 Sleepy Lion Hostel, the first independent backpacker hostel in Leipzig, is exactly were you want it: in the heart of the city!

The City of Revolution

Leipzig, the city of trading and fairs, is an impressive and charming city loved by tourists mostly due to its beautiful architecture and the multitude of historical sights & monuments.
Leipzig is mostly known to tourists and especially classical music listeners as the hometown of the famous composer and musician Johann Sebastian Bach. Bach made indeed of Leipzig a cultural attraction ever since the 18th century. The city preserves this heritage by investing in the Bach Archives, the Bach Museum, the St Thomas' Boys Choir, and the Gewandhaus Orchestra, which all bear the mark of Bach’s talent and intervention.

The Leipzig Trade Fair (Leipziger Messe) is often called the "mother of all trade fairs" because its tradition covers over a millennium. It used to be a meeting place for all the European traders in the middle ages and held an important role after the Second World War when connecting Eastern and Western Germany in matters of politics and business.

A new exhibition center to host the annual trade has been launched in 1996. The major events that annually take place in this building are the Games Convention, the Leipziger Buchmesse and the Auto Mobil International.

The first signal for the Peaceful Revolution of 1989 was given in Leipzig. You can visit the St. Nicholas church (Nikolaikirche) where people used to gather every Monday from 1982 to 1989 and pray for a change. Street manifestations followed in Augustusplatz 1989 and continued in other locations. Leipzig became the symbol of the Peaceful Revolution. The protesters marched against the political repression of the Cold War and struggled for democracy and freedom.

Zum Arabischen Coffe Baum is famous in Europe for being the oldest surviving coffee house and restaurant on the continent and it has been functioning ever since. A part of the old restaurant is nowadays used as a museum proving the continuity of the local coffee tradition and good taste.

The Old Town Hall of Leipzig is considered to be one of the biggest Renaissance treasures in Germany. Finished in 1557, the outstanding building was added a baroque cupola later on, in the 18th century, completing the masterpiece of the architect Hieronymus Lotter. Though it has been through hard times during the Second World War and cautiously restored afterwards, the edifice still benefits from a great admiration, awaiting its visitors in the Museum for City History.

The Leipzig Opera House is anther wonder of the old city laying on a tradition of over 300 years, being the second opera in Germany as to its beauty and importance.
(text by sunexpress.com)
left right